100 MEN 100 HOMES’ mission is to revitalize the Austin and surrounding communities by using the capacity of ordinary citizens to rebuild their communities. The goal of the project is to employ 100 men residing in these communities to restore 100 vacant, foreclosed and/or abandoned properties for 100 low to moderate income families at a rehabilitation cost of less than $100,000 per home. 100 MEN 100 HOMES presents a comprehensive and cost effective approach for revitalization by leveraging public and private resources alongside proven community expertise to employ, empower, and build capacity of community members in restoring their own communities from the inside out.

The Westside Health Authority has identified 3 zip codes (60651, 60644, 60624) in which properties will be targeted for redevelopment. The properties will be acquired through private acquisitions and donations received through NCST (National Community Stabilization Trust) and other banking and community affiliations. Preference for donations will be sought within the Austin MMRP (Micro Market Recovery Program) area, which is located within the North End of Austin in the 60651 zip code. The funds will be used primarily to build on the existing work WHA has with Austin Coming Together (ACT), the local MMRP agency. The MMRP seeks to restart the housing market in Austin by stabilizing existing, and creating new, building owners and renters in the Levin Park neighborhood. ACT is currently working with community partners and community developers to acquire and redevelop vacant properties, attract new homebuyers and renters to the neighborhood, and build community among residents within the MMRP area. The funds requested will allow WHA to build off the existing services as a community developer, receiving support from the MMRP in the form of acquisitions, marketing and promotion to homebuyers, and general community support.

The targeted properties will be single family homes and/or 2-4 unit apartment buildings which are vacated and in blighted condition. As in past developments, WHA is committed to working with local contractors and local suppliers to complete restoration. By using local contractors, WHA has the opportunity to help direct hiring of local youth and other residents to work on these projects. Additionally, WHA provides block-by-block organizing on targeted blocks to build relationships among neighbors and to reduce crime and vandalism of restored properties.

Employment of community residents is an integral part of this program design. The goal of this phase of the 100 MEN 100 HOMES project is to provide 10 jobs for men residing in the targeted communities that have faced obstacles in obtaining employment, with a focus on the ex-offender population. In addition to public notice and community outreach, WHA has a Community Reentry and Employment Center which registers and serves approximately 600 returning ex-offender residents each month, from which candidates are prescreened and identified for potential construction laborers and tradesmen. These workers will be hired to provide demolition or deconstruction as well as other identifiable trades. In addition, Case Managers provide ongoing support to contractors to work with the hired workers to ensure successful outcomes. WHA also seeks to provide basic training for qualified applicants. In 2010, WHA (with grant funds provided by the Chicago Community Trust/Searle funds) provided an on-site 16 week Basic Construction certification course to 25 ex-offenders seeking to learn the fundamentals of Carpentry which was taught by instructors from Malcolm X College. WHA is currently seeking additional funding in order to provide more opportunities for training, and has linkage agreements in place with training providers to accept screened referrals for this customized training.

Upon completion of redevelopment, WHA and its Coalition partners will seek to sell these homes at or near cost utilizing several existing networks. This initiative seeks to also provide home ownership to many first time buyers. The Coalition will continue to work with local banks and elected officials to create strategies for financing home mortgages for non conventional buyers.

In addition, funds provided will help target and provide outreach and interventions to families at risk of bank foreclosure. These families are provided ongoing assistance to ensure successful outcomes. It is anticipated that at least 100 families will benefit from the Coalition’s ongoing Home Buyer seminars, pre-purchase counseling, financial literacy, foreclosure prevention counseling, and outreach activities.

The targeted area for 100 MEN 100 HOMES Initiative is Austin and its surrounding communities including Garfield Park and Lawndale communities and near West suburbs. Austin is the largest community in Chicago both in land mass and population, located on Chicago’s far west side. Zip Codes in this initiative include: 60644, 60651, and 60624.

With a total of 33,345 households (a decline of over 5% since 2000),the Austin community is mainly African American (90%), with the problems of many urban communities, including high crime, high unemployment, high rate of absentee fathers, and a high school drop-out over 40%. With a declining population of 98,397 residents, Austin’s unemployment rate is 17% and is as high as 34% for persons in the age range of 16 -24; 28% of the population (27,300) fall under the federal poverty guidelines; 14,942 (15%) fall under the 50% poverty guidelines for extreme poverty.

The foreclosure emergency has exacerbated many other issues in the Austin and surrounding communities including plunging property values; destabilization of the local tax base; declining population; school closures; displaced families; physical blight; and economic disenfranchisement for over 100,000 Chicago area residents.

The 100 MEN 100 HOMES initiative addresses these issues with an innovative community based model with public/private partnerships for improved community financial literacy, foreclosure prevention, job creation, and new affordable homeownership opportunities through restoration/re-sale of homes. This Initiative will draw on the decades of experience and expertise held by members of the Coalition in working to revitalize these targeted areas.

Funds obtained can be used immediately to add to the restoration of homes in the Austin community and build on the existing work of MMRP and Coalition of community partners. In addition, WHA has secured a commitment from Chicago Community Loan Fund (CCLF) in the amount of $1 million loan to support the housing development proposed.

Moreover, WHA has added 2 partners to strengthen its capacity. The first new partner is with the Neighborhood Assistance Corporation of America (NACA) to provide mortgage seminars within the Austin Community for first time home buyers. The second is with Genesis Construction and Carpentry Services, a licensed General Contractor and certified Minority Owned Business Enterprise (M.B.E), to serve as the construction manager for WHA.

It is the hope of this project will continue to gain momentum and restore home values. 100 MEN 100 HOMES is a model that can be developed as a pilot for a larger scale project to restore the over 100 homes that have been foreclosed in the Austin community since 2008. It is a model that has been developed by Coalition partners taking input from community members who realize that while boarded and vacant homes on their block contribute to community devastation, it is also the devastated citizen who must be re-established in order to effectuate true community restoration.

A Few Pictures from Our Efforts 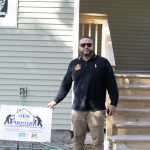 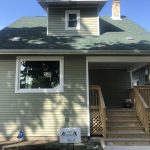 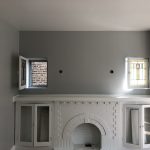 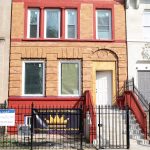 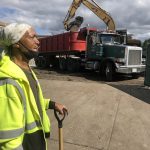 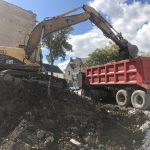 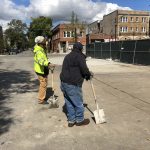 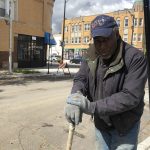 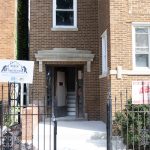 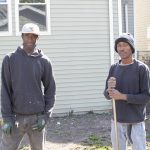